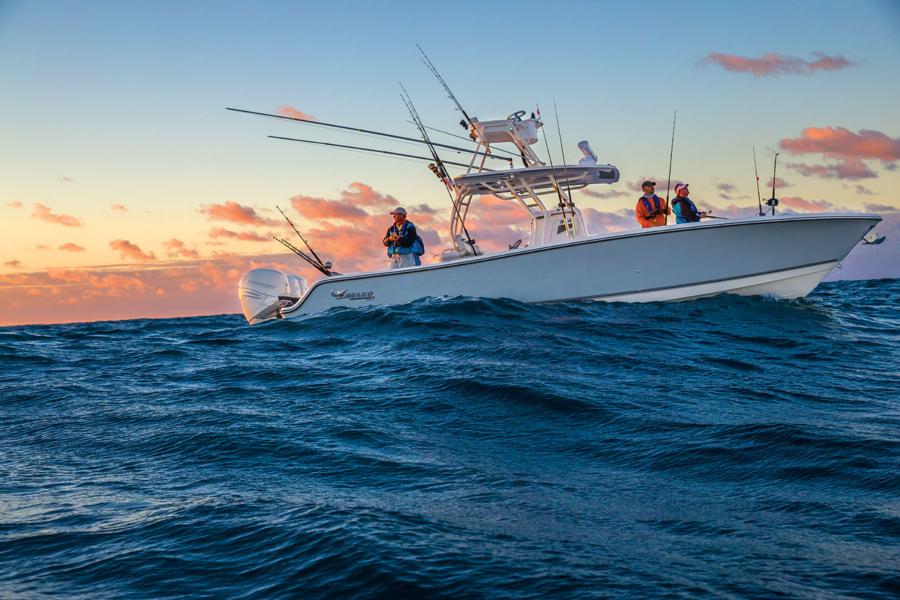 Boat manufacturers are starting to release information on their 2017 boat models. One of my favorites so far is the 2017 MAKO 334 CC. Mako will sell the 334 CC in three different “Editions”. Each edition includes a unique set of options that set the boat up to be used in a specific way.

The Standard Edition includes an impressive list of features that are also included in the two other editions. They include a full-featured Garmin® electronics package, FUSION marine stereo, leaning post with freshwater sink, cooler, and storage, twin 290-quart in-deck coolers, a walk-in head, dive door, and two pressurized 34-gallon baitwells with rounded corners.

The Bluewater Family Edition makes the 334 CC more family friendly. Options in this edition include luxury bow seating with fold up back rests and storage below. The bow cushion can easily be removed and replaced with a raised table for entertaining. The table and cushion store in a large in-floor compartment when not in use. A 5’auto-retractable sun shade extendeds from the back of the T-Top. It is controled from the helm or from a mobile device with an app.

The Sportfish Edition turns the 334 CC into a true offshore fishing machine. Options in this edition include an upper helm station with Mercury® VesselView® and premium outriggers. The large bow area is left open leaving plenty of room for fighting fish. There is also a 292-quart coffin box in the bow that lifts on hydraulics to reveal storage beneath.

I like this idea of packaging options into Editions. Customers can quickly choose options that meet their lifestyle. MAKO can build in the options they know their customers want at the factory. It should speed up delivery time while reducing production costs. This could become a trend. Go to the MAKO website to learn more about the 2017 MAKO 334 CC.

This site uses Akismet to reduce spam. Learn how your comment data is processed.