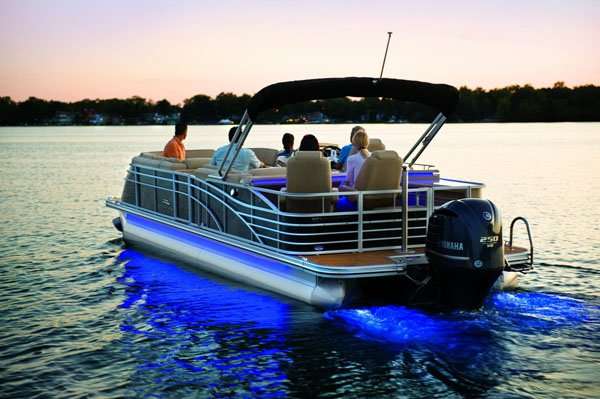 A boat deck light controller doesn’t have to cost a fortune.

Hay, your boat would look that good too if it had multi-color deck lights. And if they dimmed and flashed and cycled between colors like the big boys. Now that would be cool!

Actually, you can have multi-color LED boat lights like the big boats. And without the big boat price.

You see, luxury boats use high-end light controllers that cost between $400 and $500.

Spending that kind of money on the average boat just doesn’t make sense.

But what if you could get a boat deck light controller with most of the same features for about a third the price?

The SCM-SNLC is an RGB light controller that allows you to control all your boat deck lights through a single switch.

Control your multi-color boat deck lighting together as one. Accent lights, cockpit lights, and courtesy lights join together to form an engaging light display. Better yet, connect the control wire from a Shadow-Caster SCR-CC underwater yacht light to sync your underwater lights with your deck lights. Your friends will be amazed at how awesome your boat looks.

The SCM-SNLC is perfect for controlling boat cabin lighting as well. Change moods from bright and inviting too soft and relaxing or even warm and romantic. The SCM-SNLC allows you to adjust color and brightness for the perfect environment no matter what you’re doing.

The SCM-SNLC is a watertight box used to power and control all of your RGB lights at the same time. There are three blocks of color-coded wire terminals to simplify wiring, cable glands to help keep water out, and a fuse to protect your lights. A switch powers and controls the RGB/RGBW lights. It controls but does not power, lights wired to the underwater light terminals.

First, rout a cable from a momentary rocker switch to the box. Next, the cable passes through a cable gland and it’s wiring connects to their color-coded terminals.

There are three color-coded snap-down terminals. A red terminal for power, black for ground, and a blue for the control wire. The control wire allows the switch to send commands to the lights.

The second block of terminals is for wiring out to the lights. There are five terminals. Black for ground, red, green, and blue for RGB lights along with a white terminal for RGBW lights. In addition, there is a small toggle switch below the terminals. Set the switch to RGB to control RGB lights and RGBW for RGBW lights. It is set for RGB lights at the factory. Only change it when using RGBW lights.
Because of their low current draw, a switch can be used to power deck lights. For example, an 8′ section of Shadow-Caster RGB light strips draws only around 2.7 amps of current. Shadow-Caster SCM-DL downlights use only 250mA per light. At that rate, four will draw only 1 amp. Finally, Shadow-Caster SCM-CL courtesy lights only use 60mA of current. You could install 16 and still not draw a full amp of current!

Who is it for?

Pontoon boats, deck boats, bowriders, wake boats, and center console boats all look great with accent lighting. And when those accent lights are synced with underwater lights the effect is even more stunning.

Additionally, the SCM-SNLC can be used to control RGB mood lighting in the cabin of cruising boats and yachts. In short, use the SCM-SNLC anywhere you want to add RGB accent lighting to your boat.

How is it used?

The SCM-SNLC controls RGB and RGBW LED lights through an ON/OFF/Momentary switch. A momentary switch sends power through a wire when pressed. Release the switch and the power stops. Doorbells and the starter switch on your car are examples of momentary switches.

Pressing the momentary switch sends a signal to the SCM-SNLC using Shadow-Net technology. Shadow-Net is a communication protocol that allows the SCM-SNLC to “talk” to the lights. In other words, it’s what lets you control the lights.

I’ve created this demonstration to show how the SCM-SNLC works.

RGB deck lighting makes your boat look awesome. But you need an RGB light controller to take full advantage of everything your lights have to offer. Buy your SCM-SNLC today and take control over your RGB or RGBW deck lights.

Any cookies that may not be particularly necessary for the website to function and is used specifically to collect user personal data via analytics, ads, other embedded contents are termed as non-necessary cookies. It is mandatory to procure user consent prior to running these cookies on your website.