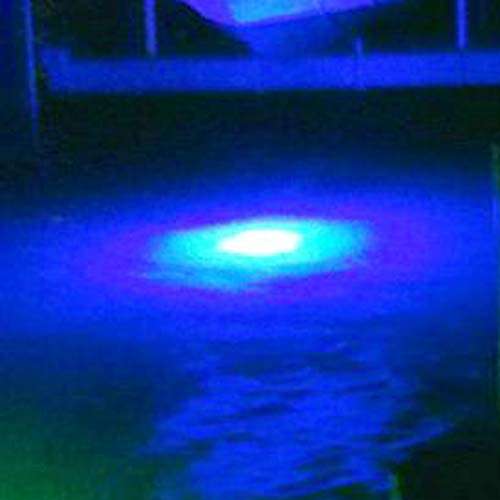 Installing underwater dock lighting is easy. Especially once you learn this one simple trick!

Apollo and MegaWatt underwater dock lights are already crazy easy to install. After all, it’s really only a four-step process.

The strap snaps into two tabs on either side of the light. It attaches to both the power cord and the light to prevent the cord from being tugged at as the light floats in the water.

The power transformer changes AC power from the outlet to the DC power the lights use. Two screws hold it in place near the outlet.

There’s nothing complicated about it.

However, there is one adjustment you can make that will improve how the light looks in the water. It’s depth.

Apollo and MegaWatt underwater lights float in the water. They are heald to the bottom by a weight attached to the power cord.

This also helps when you have more than one light and you want all of them at the same depth.

The Trick to Sliding the Weight

To adjust the depth of the light you slide the weight along the power cord.

The power cord is attached to the weight by a two-piece bracket. Loosen the two screws on the bottom of the bracket and the halves separate. The cord will then slide through the bracket. When you have the light at the depth you want just tighten the screws.

What frustrates most people is that the cord doesn’t slide through the bracket very easily. Even when the bracket is very loose!

This is where my simple trick comes into play.

Flip the weight over and loosen the two screws. They should be loose enough so that you can separate the two halves of the bracket by at least 1/2 inch.

Flip the weight back over.

The cord will slide through the bracket much easier than if you only pull on it or push it.

This one simple trick will save you both time and frustration when setting the depth of your Apollo 40 or MegaWatt 100 underwater dock lights.

I hope you found this post useful. if you did, please share it with your friends on your favorite social media site.

Buy your Apollo or MegaWatt today.