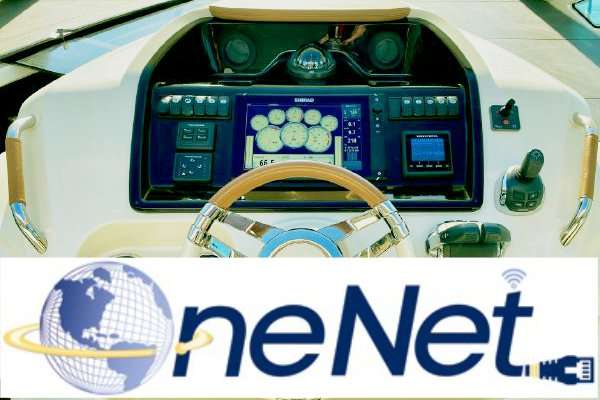 NMEA has a new standard, OneNet. OneNet links, controls, and monitors your boat’s electronics like NMEA 2000 but with the speed you need for radar, sonar, and video.

NMEA 2000 connects, controls, and monitors all of your boat’s electronics. It allows marine electronics from different manufacturers to talk to each other and share data. Every device on the network is able to communicate with every other device. As a result, only one cable is needed to connect all your electronics, power most of them, and transmits all of their data.

Unfortunately, NMEA 2000 was never designed to transmit large amounts of data. In fact, with a data transfer rate of only 250 kilobytes (KB) per second, it is much too slow for transmitting radar, sonar, and video images. Because of this, boaters are forced to set up a separate ethernet network.

Ethernet has the speed you need for transmitting large amounts of data. In fact, it can transmit data at 10MB per second or more. That’s more than fast enough to keep your most data-hungry devices running smoothly.

So why not just use ethernet instead of NMEA 2000? Unfortunately, ethernet is not designed to do the things NMEA 2000 does so well. That is, connect marine electronics from different manufacturers together in a way that they can talk to each other and share data.

This leaves boaters with two different networks. One for sharing data between devices and one for transmitting images. It’s not a great solution but it’s the only solution you have.

The NMEA has just released a new standard for connecting marine electronics. It’s called OneNet and it incorporates the speed of ethernet with the ability to link devices from different manufacturers as NMEA 2000 does.

OneNet is based on the IPv6 Internet Protocol and IEEE 802.3 Ethernet Local Area Network (LAN). If these sounds familiar, that’s because they are the same technologies used to link computers to printers and other devices in your home or office. NMEA chose this technology because it will “significantly reduce implementation cost and ensure compatibility with existing TCP/IP networks around the world.”.

IPv6 is the latest version of the Internet Protocol. The Internet Protocol is used to identify individual devices across the internet. IPv6 uses 128 bit addressing to create 340 trillion trillion (yes, trillion twice) available addresses. IPv6 also makes sending data more efficient with better performance and increased security. If you want to find out more about IPv6 you should read this article on networld.com.

IEEE 802.3 is a set of standards that creates a Local Area Network (LAN) and establishes how to connect devices to it.

OneNet will have many improvements over NMEA 2000.

First is speed. OneNet will be between 400 to 40,000 times faster than NMEA 2000. Data transfer speeds between 100Megabit per second and 10 Gigabit per second will be possible. The network will easily handle data-hungry devices such as radar, sonar, and video that can not be used through NMEA 2000.

Next is the number of available addresses (devices) that can be connected to the network. NMEA 2000 is limited to 252 addresses. OneNet will have an almost unlimited number.

More Power. Each device can be powered up to 25.5 watts directly from the ethernet switch. That is more than twice the power NMEA 2000 can supply.

How OneNet and NMEA 2000 are Alike

NMEA released the OneNet standard in November 2020. It plans on certifying the first marine electronic devices as OneNet compliant in late 2021. In other words, the first OneNet enabled devices won’t be available until late 2021 or early 2022.

Technology is designed to keep moving us forward. OneNet will do just that by allowing boaters to connect all of their electronics through a single network.