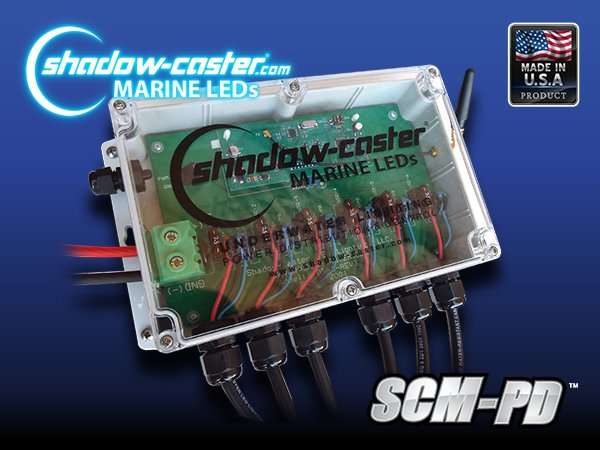 What if there was an easy way to wire up to six single color underwater boat lights? A way to simplify the wiring process that would save you money in both labor and materials.

Whatever your reasons, that many underwater lights is an investment that you will want to protect.

First, you don’t want five or six sets of wires running half the length of your boat. This can lead to voltage prop and chaffed wires that can cause a short.

Next, you want to use as few wire connections as you can. Each connection is a possible future problem. Even the best connections can come loose or allow water to seep in and cause a short.

Finally, you want your wiring to be as simple as possible and for each light to have its own fuse. Complicated wiring leads to light being wired backward. This will destroy LED lights which are sensitive to polarity. Also, a fuse is required to protect your lights from shorts. And if one of your lights ever does stop working, having it will make finding the problem much easier.

When wiring underwater boat lights you have two options. Wire your lights in parallel or wire them through a power distribution box such as the SCM-PD.

Each light has two connections, one to the positive wire and one to the negative wire. Each connection increases the amount of time it takes to install the lights and the number of materials needed. It also creates a point of possible failure.

Wiring your lights through a power distribution box such as the SCM-PD greatly reduces the number off connections needed and materials used during installation. This shortens installation time saving you money on labor costs.
The SCM-PD power distribution box provides a central location to wire up to six single color underwater boat lights.
Each light is wired to its own color-coded and fused terminals. Then, a single wire is run to a switch at the helm to control the lights.

There are several advantages to using SCM-PD.

The SCM-PD is a power distribution box that will handle up to 6 lights. A single wire from a switch at the helm powers the box. The SCM-PD box is placed in a central location and the lights are wired to the box.

The SCM-PD is watertight. A sealed lid and cable glands protect wiring connections from the damaging effects of water. The top and even the wires running into the box seal tight to prevent water from entering and corroding connections.

Wiring is a Snap